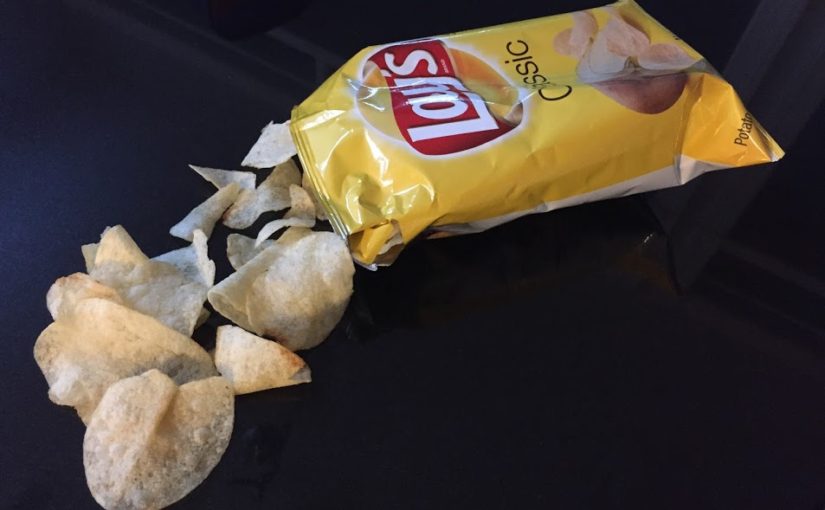 Years ago, I knew a man that worked at a local fly shop. He was a pudgy, gnome-like character; opinionated, and maybe not so well informed. Anyway, he would not strike anyone as the philosophical type – not right off the bat anyway. He told me once that he just needed “one fish”. 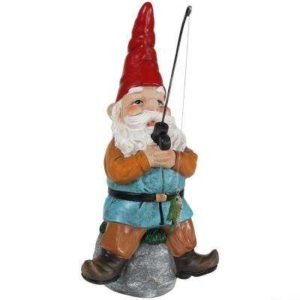 This is what he meant by “one fish”. On any given day if he had time to catch one fish, the day was good. After that “one fish” he could recover from or move on to more tedious chores and responsibilities.

That was somewhat puzzling to me. I understood what he was saying, but could not relate to it. To me fish were like potato chips. If I caught one it made me want to catch two, and two made me want three, and so on.

In the last few months I have frequently thought about what my gnome-like friend had said. I am starting to feel that way more and more myself. There are days when one fish is all I need to make the day complete. I’ve always found peace in fishing, but it has really started taking on a zen quality. 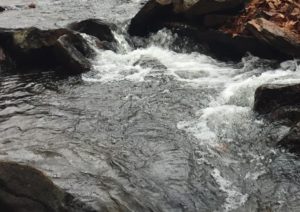 So anyway, the other day I had time for a quick trip for that “one fish”. I chose a local trickle. After a short walk, I began working upstream away from my car. It wasn’t long before one fish ate my fly.

It was a colorful native brookie. It was an exemplary, small stream trout. It could be my “one fish”. There was a bit more to this stretch of stream, so I continued on beyond this one fish. I was content, but not done with the stretch of stream. 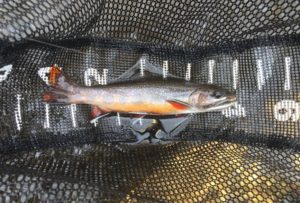 A couple of pools upstream, I had another take. An energetic hook set on a short line flung the fish out of the water. I recognized the small fish as a brown trout as it sailed past my shoulder. I tried to keep gentle tension on the line as the fish came down in the water behind me. I wasn’t able to pull it off. The barbless hook came free, and I chuckled to myself at the preceding sequence of events.

The next pool held another hungry fish. This fish had enough body weight to stay put when I set the hook. The head shakes and the bend in my 2 weight identified a solid fish. I worked it out of the depths and into the shallows where I was standing. A foot long brown with big black spots was about to be fish number two, or so I thought.

The trout made one more lunge into the current. It stopped dead for a moment. Something changed. I could see the fish, but the head shakes stopped. The second fly on the tandem rig was snagged on something.

I pulled my net free from the magnetic net holder, and hustled toward the tethered fish. Just as I started to bend toward the trout he shook free of the hook and left me pinned to a trash bag. Oh, the challenges of suburban trout fishing! 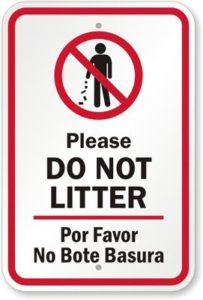 This was not followed by any chuckling. This warranted and received a string of expletives, diminishing, but repeated every time I thought about that fish. My satisfying “one fish” from a few minutes ago was no longer so satisfying. I needed a win to make up for that loss. So much for zen.

I was nearing the end of this stretch of stream. Only a couple of pools remained. I blew it on both of them. I hung the fly in shoreline brush and had to walk too close in order the free it. The pools were spoiled. I couldn’t buy a strike. Maybe I was still flustered, or maybe it was just bad luck and a crosswind.

I couldn’t walk away beaten. I hiked downstream, past my starting point, and through the woods. I was going to fish another stretch, working my way back upstream toward my car.

The first few likely looking spots yielded no fish. My muttering self diatribe was starting again. Then I hit paydirt. In about the fishiest looking pool you could imagine I had a take.

Here’s my brown. No wait! It’s a rainbow. I had heard that there were wild rainbows in this stream, but this was the first I had seen myself. I was quite pleased for a moment. Now, here’s where the greed kicks in. 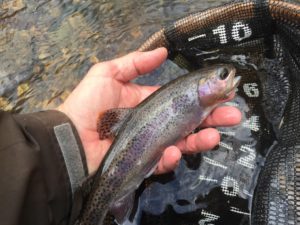 As much as I appreciated catching this beauty of a wild rainbow, it made me crave another potato chip. I had a brook and a rainbow. Now, I needed a brown to complete a slam.

What was that nice fish I lost earlier? Oh yeah, it was brown trout.

The next pool looked as promising as the previous only just a little bigger. Right away I get a take. Here’s my brown. No, it’s not a brown. It’s another rainbow, a beautiful specimen and only the second I have seen in this stream, but not a brown. Talk about conflicting emotions. 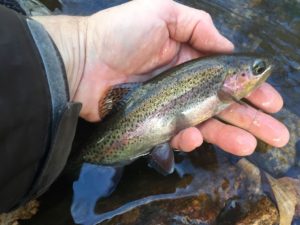 The next hole yields a small brookie. Again, it’s almost a disappointment – almost. The next after that offers another taste of defeat as a diminutive brown trout shakes my hook before I can land it.  This is turning into work.

Fast forward through the stream bed, sprinkle in a couple more natives, and another lost brown. Let’s wrap this up. This story is starting to drag. 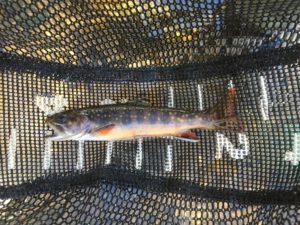 I reached a section with a little different topography. It was a little flatter. There was more sand and wood. There were fewer boulders. I was running out of both time and water.

At the tail of a large flat pool, I see a fish holding just off a log that runs nearly the length of this pool. Like clockwork, the fish takes my fly on the first presentation. As it turns with the fly, I see it is a brown. I pull tight and the fish immediately shakes free and runs under the log. For some reason this one doesn’t bother me. Maybe I’m beaten. 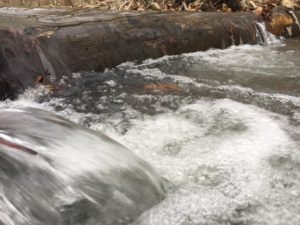 I move a few feet upstream to cast to the head of the pool. The water is flat and crystal clear. I can see everything – almost everything.

I cast above where a fish should be. The fly drifts a couple feet. I see a trout materialize out of nowhere. It turns and I set the hook. It’s a nice one. After a few big head shakes, the fish turns downstream and performs a splashy, wallowing jump. It’s bigger than I thought. 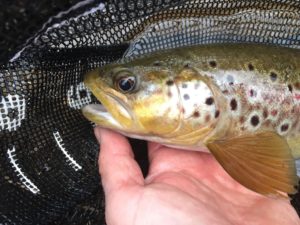 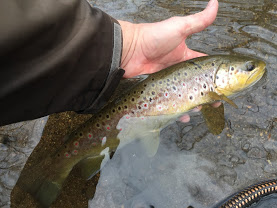 After a crazy tug of war, up the pool, down the pool, under the log a couple times, an absolute beauty of a brown comes to my Northkill net – measuring a smidgeon over 15 inches. That was the fish I needed. It was a big fish for a trickle, a big fish on a 2 weight, a brook-rainbow-brown slam, and compensation for my earlier loss. That was the “one fish” and the last potato chip. 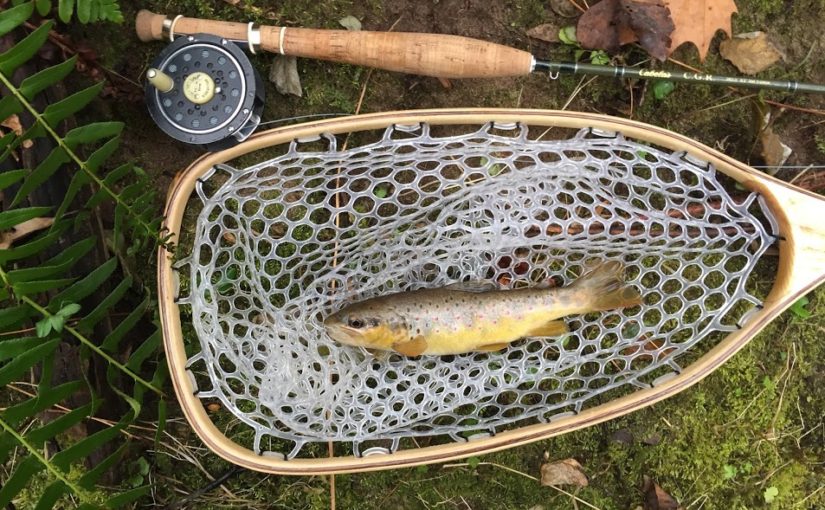 I set out to catch 20 different species on a fly rod in 2018. Although I fell short of the goal, the fly rod species list was probably more of a success than a failure. It was a little distracting at times, but it got me out on some new waters, and to some degree reunited me with fly fishing. A new year is upon us, and I’m wondering whether I should take another crack at it.

Where “The 2018 Fly Fishing List” ended – just one species shy of the goal:

Not bad, but I can’t help think of a few species I could have or should have caught on the fly last year. OK – I just decided now. I am going to take another crack at breaking the 20 species barrier. Check in for updates here on the website in the coming weeks.